I recently spent a day touring local bookstores in Denver, and while I was at it, my fellow adventurer and I decided to make eating locally a part of our day, starting with breakfast at Snooze on Colorado Boulevard followed by lunch later at The Crushery on South Pearl Street. 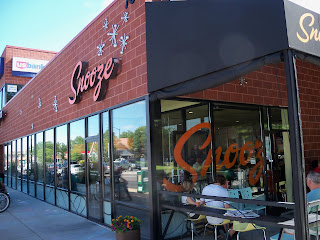 Snooze is located various places throughout the Front Range of Colorado, with the most recent store opening on Pearl Street in Boulder. I like Snooze for its use of local food as much as possible. On the weekends, it's not at all unusual to find a line of customers waiting for a table, often with at least some of those customers waiting outside. I happened to visit on a Wednesday and got there at 9:00 a.m., so the line was nonexistent and the wait was minimal.

Snooze has a funky decor, somewhat reminiscent of a 50s style diner but with a touch of a George Jetson feel. The staff has been friendly and fun to talk with all three times I've been there (this was my third time, and my second breakfast there), and the organic, Guatemalan coffee is rich and flows freely and often. 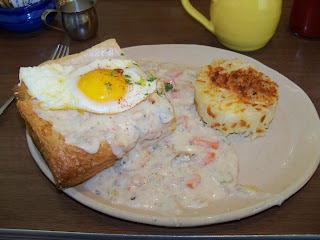 I ordered the Breakfast Pot Pie, a rosemary sausage gravy served in a puff pastry with an egg on top and hash browns on the side.

Now I'm pretty fussy when it comes to sausage gravy, and it is a rare restaurant that does it right. (For the record, I have yet to find a hotel restaurant that does it right.) Too often the "sausage gravy" served in restaurants resembles a thick, heavy paste that might or might not have some flecks resembling sausage in it and is almost never seasoned properly. I am happy to say that Snooze does it wonderfully. The sausage and seasonings were in perfect balance, and the addition of veggies to the gravy in my pot pie were tender yet crunchy. The puff pastry was light and flaky; wasn't at all soggy, and the creaminess of the egg only added to the pleasure of the entree.

Unfortunately, not as much attention to detail was given to the hash browns, which resembled and had a similar texture to the frozen version found in most supermarkets. When done correctly, as is the case at Root Down, another Denver establishment that focuses on local food, the potatoes can be a wonderful treat on their own (see my review of Root Down here); the hash browns at Snooze seem almost an afterthought, and that's too bad. The potatoes were mushy and lacking in both seasoning and flavor, requiring a dose of sat and pepper with hot sauce or ketchup to rescue them from utter forgetfulness. My cohort for the day ordered the Ham Benedict, which he said was excellent and found the flavors and textures of his entree in a wonderful balance, but he agreed with my assessment of the hash browns, which also came with his meal. 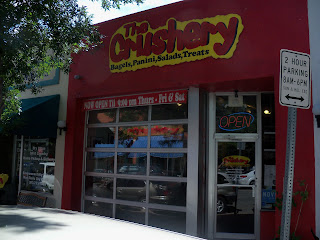 Our hearty breakfast carried us over well until mid-afternoon (we were full without feeling weighed down or at all uncomfortable), at which point we found ourselves on South Pearl Street. Wandering down the street, we found The Crushery. Neither of us had ever been there but were both in the mood for something not expensive but good.

At first glance, The Crushery seemed to be your regular, cool sandwich shop, offering both paninis and bagel sandwiches of the breakfast and lunch variety, but a menu tucked under the sandwich menu quickly betrayed the uniqueness of this place: The Crushery is the first affordable restaurant to take advantage of the principles of molecular gastronomy, in this case with its offering of -321 Ice Cream, made-to-order ice cream using liquid nitrogen. There was no way I could resist this. 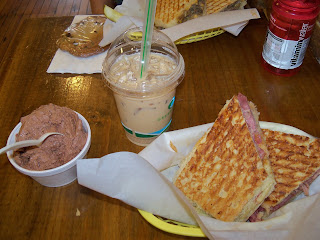 But first, lunch. As extensive as the ready to order menu was, it seemed lacking vegetarian options, at least on the panini side, and there weren't that many appealing options for an al a carte sandwich, so I decided to try the Reuben, another meal that is a favorite of mine but is hard to find done well. The Crushery's version was quite satisfying and tasty; the sauerkraut wasn't overpowering and the bread was crunchy and crisp. (Though the pickle that came with it was a bit on the soggy side.) The iced latte I ordered was well balanced, with smoky notes and no trace of bitterness, and as an added bonus, was served in a compostable cup. The ice cream was...well...amazing. I created a chocolate ice cream with cinnamon and sea salt combination that was far better than I thought it was going to be, and it was decadently rich with a texture that silk would envy. 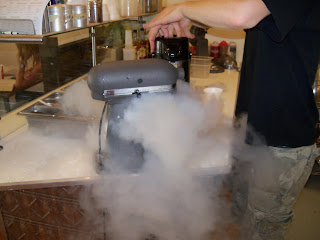 The first step of the process is choosing the base, whether  a traditional ice cream base, yogurt, sugar free, or vegan. After that, there is a plethora of options to add in: various syrups, spices and herbs, nuts, fruits, and so on; almost anything you can think of is offered. The ingredients are poured into a mixer and after things are thoroughly blended, the liquid nitrogen is added in, creating a wonderful "mad scientist" visual effect as the ice cream is created. Within minutes the frozen treat is done and served. According to the staff, the ingredients are frozen so fast that the ice crystals are super small, thus creating the aforementioned creamy texture. Quite simply, this was (is...I have since gone back) the best ice cream I have ever had, period.

Both of these restaurants are happily different from any establishment that offers similar fare, and both are very affordable. Ultimately, both only reinforce that eating at locally owned, independent restaurants is always (or at least as much as possible) the way to go.